Editor-in-Chief of the New Crusading Guide newspaper, Kweku Baako Jnr has confirmed the existence of a third party in the Anas-Nyantakyi saga.

The former boss of the Ghana Football Association (GFA), Mr Kwesi Nyantakyi, had alleged that prior to the airing of the exposé, he was contacted to make a payment of $150,000 to Tiger Eye PI team so that the video, which unearthed unbridled corruption within the GFA, would not be presented for public viewing.

“Let me also confirm that there was a demand on me through a third party to part with $150,000 for Anas to drop the videos on me. I didn’t have the said amount of money to meet his demand,” the embattled former GFA boss said in an eight page statement.

A claim which the Tiger Eye PI team has flatly denied.

The ace investigative journalist Anas Aremeyaw Anas in a sharp rebuttal described Mr Nyantakyi’s claim as a “complete fabrication, a figment of his imagination.”

Contributing to a panel discussion on Wednesday’s edition of Peace FM’s morning show ‘Kokrokoo’, Kweku Baako confirmed that indeed there is a third party, but would rather Mr Nyantakyi names the individual.

The Seasoned Journalist further disclosed that days before the premiere of the Number 12 investigative piece, that third party tried to ‘compromise’ the documentary “but now that Kwesi Nyantakyi is the one making the allegation, he should mention the name and I will also come out with mine and we will see who is telling the truth”.

“…Nyantakyi is the one making the allegation; there is a third party; he should mention the name of the third party…The lawyer attempted to compromise the integrity of this project…so there is indeed a third party. It is important that once he’s decided to go along that path he mentions the third party…this is a good opportunity; identify the third party…let’s put the third party on the spot. As soon as the third party is identified, I will make the evidence available…on air for everybody to listen; for Ghanaians to judge for themselves…” he indicated.

Previous Martin Amidu has been demoted; not independent – Hassan Ayariga
Next A vote for Sammy Awuku is a vote for NPP’s victory in 2020 – Yellow Man 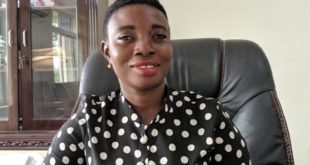