The National Disaster Management Organization(NADMO), is seeking legal backing to demolish structures on waterways to avert flooding in the country.

It has therefore drafted a Legislative Instrument which will be sent to parliament to receive the necessary endorsement to make the exercise acceptable by law.

With the onset of rainy season, many homes and offices have lost properties as a result of flood waters rushing into their buildings.

So far, 7 people are known to have died as a result of a downpour on Monday, with scores displaced especially in flood-prone areas.

Many have partly blamed the situation on the siting of structures on waterways, and blocking of drainages that force rushing flood waters onto streets and homes.

The commitment of NADMO to prevent such development has been questioned by Ghanaians who believe the organization is mainly preoccupied with giving relief items after disasters when its main mandate is to prevent disasters.

But according to the Greater Accra Regional Coordinator for the Organization, Archibald Cobbinah, it does not have the mandate to demolish structures on waterways to prevent floods in some areas.

According to him, although the law permits the organization to carry out demolishing in emergency situations; usually after a disaster, it cannot carry out such an exercise on a regular day to prevent the flood.

Speaking on Eyewitness News on Tuesday, Mr. Cobbinah said, NADMO is seeking parliamentary approval of a drafted LI to demolish structures in waterways whenever there is the need to. 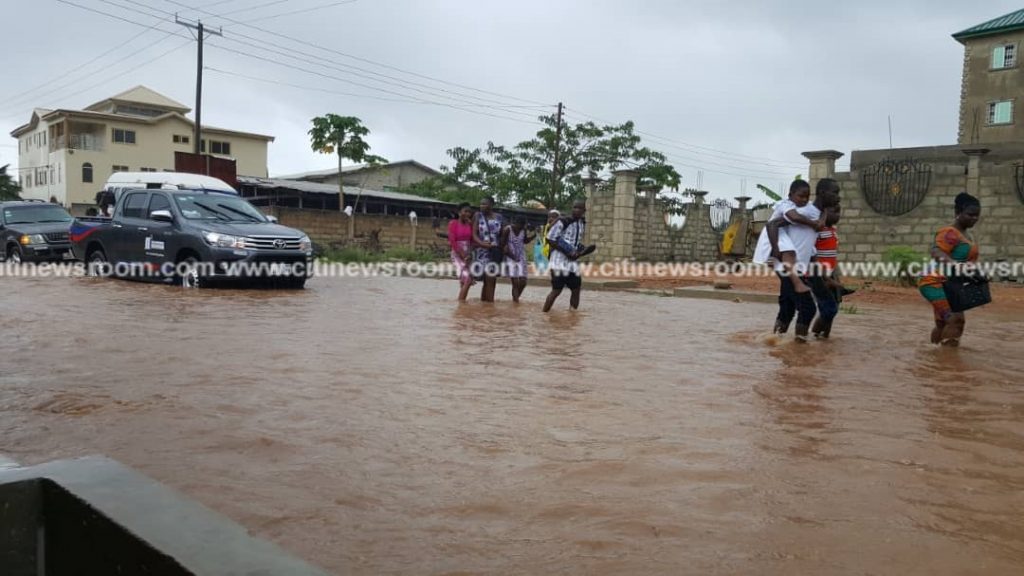 “My director General has put in the drafted LI and we are trying to push to get it through so that we can get the necessary legal backing to do that. In the case of NADMO, if we are on the grounds and there is an incident and a building is in the waterway, that one, we have the mandate to do that but aside that, what is normally not an emergency situation, it falls in the purview of the assembly,” he said.

The Accra Metropolitan Association (AMA), following heavy rains in May 2018 vowed to demolish all structures in the capital that are in waterways, but not much has been seen of the exercise as flooding in homes persist.

In the long term, the Works and Housing Minister, Samuel Atta-Akyea, has said it will cost Ghana over $700 million to effectively and permanently deal with the perennial flooding in the Greater Accra Region alone.

He held that Ghana had the technical expertise to deal with the flooding once and for all but was only in need of funds.

He has in the past indicated that the government had put together a road-map to provide a permanent infrastructure solution to the flooding problem.

But because of the capital expenditure for the provision of the drainage and sewage to fix the recurring floods are beyond the national budget, the Minister said there would be the need to seek external help.

No details were given on this permanent solution at the time.

In the meantime, Mr. Atta-Akyea said the cycle of flooding and desilting drains in Accra will continue.