WATCH: No link established between Malmesbury and Verulam mosque attacks yet – Sitole

According to the Associated Press, the Democratic Alliance has condemned the attack and said South Africans have the right to religious freedom.

“An attack on people while they worship is a direct attack on the Constitution and the freedoms we enjoy in this country,” the DA said.

STATEMENT: South African Jewish Board of Deputies on behalf of the Cape Jewish community

“The Cape SA Jewish Board of Deputies and Jewish community condemn the heinous act of violence that took place in the Malmesbury mosque this morning. There can be no justification whatsoever for the loss of life at a place of worship, in this manner. We pray for the two victims and their families, and call on all communities to redouble efforts to defeat the evils of hate for good. Mosques, churches, temples, synagogues and all places of worship are sacrosanct and must be places of safety.”

Ebrahim Rasool said that President Cyril Ramaphosa “expresses condolences to the families and the community”, according to AFP.

“(He) expresses his concern about this plague that is infiltrating the Muslim community of intolerance, killing and real conflict,” said Rasool.

My husband was ‘murdered, slaughtered’

Zainab Bassa, the wife of 72-year-old Ismail Bassa who was killed in the attack, told AFP that her husband of more than 30 years was “slaughtered” as he prayed.

“My husband talked to everybody, he loved kids, it’s a great loss for me, as well as for the community, to pass away in a masjid, murdered, slaughtered,” said the 59-year-old Bassa.

“That was his second house – you would always find him in the mosque. He left last night and said ‘I’m going now, I’ll buy you another Eid dress’.”

Two other people were wounded and are being treated in hospital.

WATCH – Malmesburg attack: MJC says they have a good relationship with the Somalian community

Police spokesperson Lieutenant-Colonel André Traut confirms, two worshippers killed, as well as the suspect. Two people were injured in the attack. The investigation has been handed over to the Hawks.

The second victim is also believed to be a Somalian national. The body of the man alleged to be the attacker who killed two worshippers in a Malmesbury mosque, lying in a field after being shot by police. (Rodger Bosch/AFP) The sons of Ismail Bassa, 74, who was killed in a mosque attack in Malmesbury on Thursday morning, have told News24 of how they tried to fight off his attacker.

Suad Bassa, 30, said his brother, Faizel, 24 was also injured in the attack.

Suad said his father was attacked during the early hours, while he was sleeping in the mosque.

His father was in the mosque for Itikaaf – an Islamic practice where men retreat to the mosque to live and pray for the last 10 days of the holy month of Ramadan.

Thursday was expected to be the last day of Ramadan, the Islamic month of fasting.

Two people were killed in the attack at the Malmesbury mosque at about 03:00.

When News24 arrived, the Bassa home was crowded as people also took shelter from the rain.

The bomb squad was checking for any explosive devices, but it now seems they have given the all-clear. Forensic workers in blue scrubs are now on the scene. (Jenna Etheridge/News24) 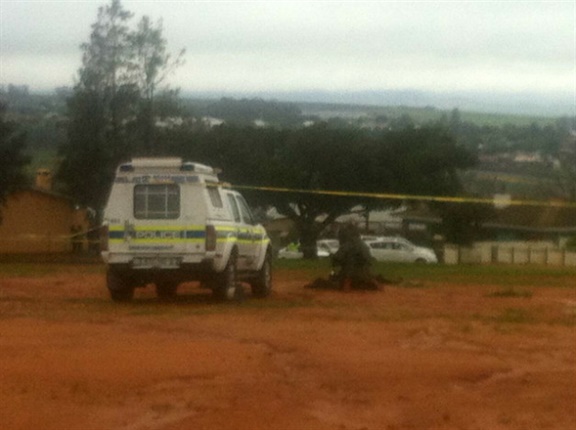 An officer from the bomb squad gets suited up in a bomb disposal suit before inspecting a suspicious bag. (Jenna Etheridge/News24) An officer in a bomb disposal suit is inspecting a bag that belonged to the attacker. It is understood that the bomb squad was checking for explosive devices. WATCH: Son of man killed in Malmesbury mosque attack tried to fight off the attacker

Members of the Muslim Judicial Council are on the scene, and President Cyril Ramaphosa has reportedly sent an ANC delegation to Malmesbury.

The muddy field where the Malmesbury mosque attacker fled to, faced off with police and died. (Jenna Etheridge/News24) According to News24 reporter Jenna Etheridge, who is on the scene in Malmesbury, Ismail Bassa (one of the attack victims) lived right next door to the mosque. It is currently pouring with rain so everyone is huddled inside the Bassa home.

Authorities have cordoned off the area around the mosque in Malmesbury. (Jenna Etheridge/News24) Ismail Bassa, 74, one of the deceased in the Malmesbury mosque attack. (Supplied) Two worshippers have been killed and several wounded in a stabbing attack at a mosque in Malmesbury in the Western Cape in the early hours of Thursday morning.

Western Cape police confirmed that the attacker was shot dead by police.

The attack comes at the end of the Muslim holy month of Ramadan, and five weeks after another attack at a mosque in Verulam, KwaZulu-Natal.

Provincial police spokesperson Lieutenant Colonel Andrè Traut said Malmesbury police were called out to the mosque in the early hours of the morning and found two people stabbed to death and several injured.

“A couple of hours ago – about 03:00 – as people got themselves ready to pray, the suspect just got up and started stabbing the people. He was praying with them,” Malmesbury Police Constable Henry Durant told News24.