The government of Ghana has set up a five-man interim committee chaired by Dr. Kofi Amoah, – chairman of the Local Organising Committee of the CAN 2008 – to oversee the administration of Ghana Football until the current impasse is resolved.

Cudjoe Fianoo, who is the Chairman of the Ghana League Clubs Association (GHALCA) will be the secretary to the interim committee.

Other members of the board include former Black Stars captain Abedi Pele, Rev. Osei Kofi and Sports Journalist Eva Okyere.

Mr. Dan Kweku Yeboah will serve as the committee’s spokesperson.

The latest move by government comes after an Accra High Court placed a 10-day injunction on officials of the Ghana Football Association and football activities in the country.

The government through the Attorney General is in the process of dissolving the Ghana FA following the premiering of the #Number12 documentary.

Mr. Nyantakyi, a former President of the GFA is also being investigated by the Criminal Investigation Department of the Ghana Police Service over a charge of defrauding by false pretense.

On Wednesday, the Financial Intelligence Centre wrote to all banks and non-bank financial institutions in Ghana to provide information on banking details of Mr. Nyantakyi.

The financial institutions have also been ordered to provide the same information on the troubled football powerhouse Ghana Football Association.

A statement by the Information Minister Mustapha Hamid said “Pursuant to an application for interim injunction at the instance of the Attorney-General and Minister for Justice for an order restraining the members, directors and officials of the Ghana Football Association (GFA) from exercising such powers as are ordinarily conferred on them by the provisions of the Companies Act (Act 179), the GFA statutes and other relevant instruments, particularly relating to the organisation of football matches and appointment of executives and other officials, the High Court Commercial Division yesterday the 12″‘ day of June, 2018, granted the said application as prayed, for a limited period of ten (10) days, as provided by the rules of Court.

Government will engage with FIFA and CAF as promised in the government statement of June, 2018, to discuss current developments in Ghanaian football administration and to chart the way forward.

Government calls on the Ghanaian people to exercise restraint as it takes steps to sanitise the situation and restore normalcy to football in Ghana. 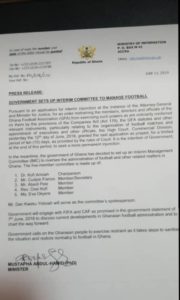