There are just about 3,400 hospital beds in Accra, serving the health needs of the over 5 million population.

These beds are found in the seven (7) major hospitals located in the capital.

Korle-Bu Teaching Hospital has the most number of beds, 2,000, followed by the Greater Accra Regional Hospital (Ridge), which has 420 bed. The Trust Hospital has 86 beds and like the abovementioned hospitals, have the equipment and specialists for highly specialised medical care.
READ ALSO: President Akufo-Addo swears in 3 Dev’t Authorities Boards and ZDF Board

The question about the number of beds in major hospitals in the country has come to the fore following the ‘avoidable’ death of a 70-year-old man who spent almost 2 hours in a car being driven by his family in an attempt to find a hospital to attend to his health emergency.

All seven (7) hospitals they visited refused to attend to him because they said there were no available beds.
READ ALSO: Government petitions High Court to dissolve GFA

The man reportedly died in his car at the LEKMA Hospital after they had visited other major hospitals including the Korle-Bu Teaching Hospital and the Police Hospital.

The infographic below captures the bed capacity of the major hospitals in Accra. 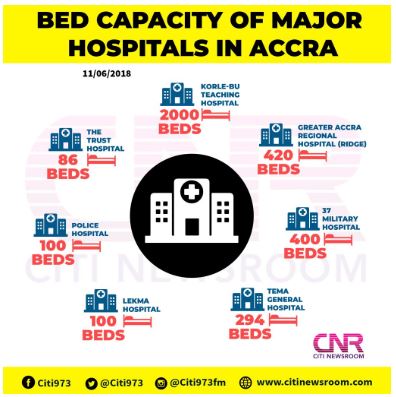 For months now, there have been a lot of rumours that billionaire Kwaku Oteng has …