The Director General of the Ghana Ports and Harbours Authority (GPHA), Paul Asare Ansah has handed over the management of the Authority to the Director of Tema Port, Edward Osei.

The Director General met with his top management team including CEOs of other affiliate Business Units of GPHA like the International Maritime Hospital and Tema Shipyard at exactly 3pm on Wednesday, 6th of June, 2018 after receiving his termination letter.

This follows a release from the Presidency relieving the Director General of his position by Friday, 8th June, 2018.

They expressed their deep admiration for his leadership style that is based on a high level of integrity, honesty transparency, hard work and above all the protection of the authority and national interests.

The GPHA management expressed that Mr Ansah’s leadership style in the past one and half years of his administration, though relatively short, will never be forgotten.

The Director of Tema Port assured him of continues support from him personally and the Authority as a whole.

The Director General also advised the management to remain calm and give off their best to ensure that the Authority is lifted high.

According to the letter from the Presidency, the Director General was to hand over to the current Director of Tema Port, Edward Osei who will oversee Affairs of the Port Authority until a substantive Director General in the person of Michael Luguje, the Executive Secretary of the Port Management Association of West and Central Africa will fully take over the management of GPHA.

The Termination of Appointment letter which was signed by Nana Asante Bediatuo, Secretary to the President and dated 5th June, 2018 was titled, Termination of Office and Handing Over.

The release said “Reference is made to your appointment contract dated 20th December, 2017, appointing you as the Director General of the Ghana Ports and Harbours Authority.

“In accordance with paragraph 8 of the said contract, the President of the Republic has terminated your appointment. You are directed to hand-over your office to Mr. Edward Osei, and proceed to collect three (3) months’ salary in lieu of notice, and any other terminal benefits or facilities due you under relevant law on contract.

“Please ensure that you hand over and cease to act as Director General of the Authority no later than close of business on Friday 8th June, 2018.

“The President thanks you for your service to the nation and extends his best wishes,” the release ended.

No reason was however given for the termination of the appointment. 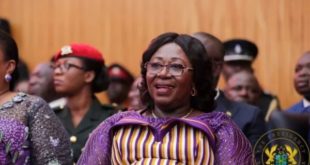