One of the ardent members of the communication team of the opposition National Democratic Congress, Malik Basintele has said Member of Parliament for Assin Central Kennedy Agyapong is an idiot.

The Assin Central MP, Kennedy Agyapong has within the past few days been executing a campaign against ace investigative journalist Anas Aremeyaw Anas who has promised to screen the latest investigative piece he did on Ghana Football.

Even before the content of the investigative piece is shown on June 6, 2018, excerpts of it have already caused a stir leading to the arrest and interrogation of the Ghana Football Association boss Kwesi Nyantekyi.

It would be recalled that Kennedy Agyapong speaking on Adom FM and Adorn TV after blasting his own party NPP for shielding Anas, went ahead to label Ghanaians as stupid for condoning and hailing the award-winning investigative journalist.

Expressing his view as a pundit on Hot 93.9FM’s morning show,”Maakye” ,hosted by Boama Darko,the communication Member of the NDC, Malik Basintele outclassed Kennedy Agyapong by indicating without mincing words that the Assin Central MP is an idiot for insulting Ghanaians and countering Anas:

“Kennedy Agyapong, member of parliament that your people voted for you, you sat on TV and rained insults on NPP that they are foolish but NPP didn’t mind you,yesterday on Adom FM he said Ghanaians are stupid ,Kennedy Agyapong is also an idiot”,Malik told Boama Darko with much anger.

Explaining his motive behind his rant on Kennedy Agyapong,the outspoken Malik Basintele delineated that,”Because my mother and father are Ghanaian and are not stupid, those who sell at the market who voted for the NPP are not stupid, so if Kennedy Agyapong thinks we are stupid for following Anas he is also an idiot for countering him”.

Malik Basintele apart from being a communication member of the NDC,is also the National Organizer,Ghana First Patriotic Movement. 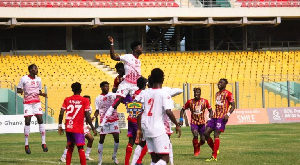