The President of the Republic, Nana Addo Dankwa Akufo-Addo, has urged contractors working on the 2nd phase of the Kumasi Airport to ensure that the project is completed within 24 months. 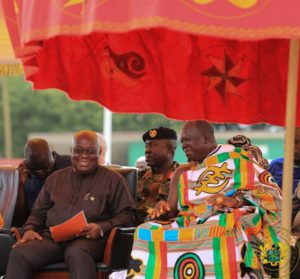 With funding having been secured for the project, President Akufo-Addo stated that “there should be no excuse for any delays by contractors to generate cost overruns. Delivery of the project on schedule should be the watchword of the contractors.”

President Akufo-Addo made this known on Wednesday, 6th June, 2018, when he cut the sod for the commencement of work on the 2nd phase of Kumasi Airport project.

Describing the project as a seminal moment in the growth and development of Kumasi, the President explained that “the expansion of this airport is a critical part of government’s vision to expand the frontiers of the aviation industry in the country, and to realise the dream of making Ghana an aviation hub in West Africa.”

In the presence of the Asantehene, Otumfuo Oseu Tutu II, the President stated that the 2nd Phase of the Kumasi Airport project is estimated at a cost of €66,350,000.

It will encompass the extension of the current length of the runway by 319, i.e. from 1,981 metres to 2,300; construction of a new terminal building, with the capacity to handle one million passengers per year; construction of an apron area and related taxiway; and the undertaking of ancillary works.

With widespread youth unemployment being the greatest threat to democracy and the stability of the nation, President Akufo-Addo stressed that the implementation of this project will result in the creation of some 1,200 jobs.

“The completion of this project will form part of the multi-modal transportation system being embarked upon by government, comprising air, marine, railways and road transportation. The project will stimulate the growth of our country’s industrial and agricultural sectors, and boost the tourism potential of Ashanti,” he said.

He continued, “In addition to expected growth in domestic air travel, the completion of the project will ensure that the Kumasi Airport will serve as one of the key spokes of the Accra Kotoka International Airport (KIA). We should, as a result, witness significant expansion of traffic in domestic and regional routes.”

President Akufo-Addo assured the gathering that Government remains committed to the development of the domestic aviation industry, with the removal of the 17.5% Value Added Tax (VAT) on domestic airfares last year ample evidence of his government’s determination to facilitate the growth of the industry.

Under the strong leadership of the Aviation Minister, Cecilia Dapaah, the President noted that over the course of the past year, the Ministry has been engaging potential investors, domestic and foreign, to partner with Government to establish a national carrier.

“I am reliably informed that that process should be complete by the end of the year. Indeed, other projects in the pipeline include the commencement of the 2nd Phase of Tamale Airport, and the rehabilitation of Sunyani Airport. The Ho and Wa airports have now been completed, and will soon become operational,” he said.

President Akufo-Addo urged the Ghana Airports Company and the Lands Commission to ensure that lands belonging to airports are managed properly and duly protected, not only for future projects of expansion, but also to safeguard lives and property.

The President assured the Asantehene “that this project is a sign of greater things to come for Asanteman, and, indeed, for the whole nation”, and was expectant that “all of us, gathered here, will be present again here, in 24 months, God-willing, for the commissioning of this project.”