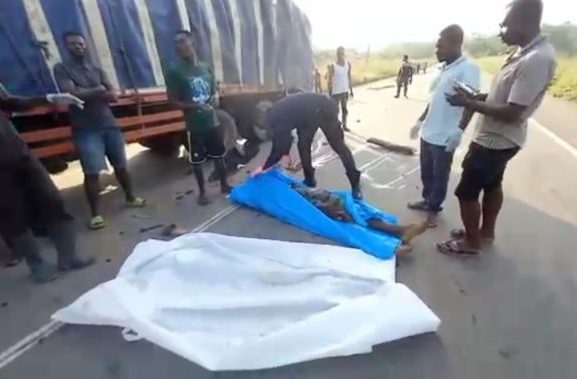 Two persons have been killed after the motorbike they were riding rammed into a stationed tipper truck at Adansi Asokwa in the Ashanti Region.

The driver is said to have survived the impact but died later, while his passenger died on the spot.

Eyewitnesses account suggest that the driver, who was the only one in helmet, rammed into the rear side of the truck with registration number GN 2368-18, plying on same lane.

Driver of the tipper truck, Yaw Asamoah, told Adom News’ Isaac K Normanyo that the crash happened shortly after he parked the car due to shortage of fuel while he was ascending the hill.

He said he had placed several warning signs on the road, alerting incoming cars of the development.

Also, his ‘mate’, who he tasked to direct cars moved away for a minute, and it was then the accident happened.

Meanwhile, officers from the Adansi Fomena police command have visited the scene and investigations have commenced.

The badly damaged bodies have been deposited at the Adeambra morgue for preservation and autopsy.